The “Tree Series” continues with Pineapple Tree IPA. For the second in the series we, again, pitted fresh tropical sweetness against Crooked Tree’s hoppyness and let them duke it out. A pleasant bittersweet bout. Think “Great Lakes Juice” more bitter and bite than a typical NE, a little sweetness, a little juiciness, thicker mouthfeel, heavier body and nice cloudy appearance. If you liked Mango Tree, you must try this one.

We will be releasing this beer to select Wholesalers and markets. Look for packaged beer mid-late July.

The Crooked Path series presents a behind the scenes look at High Five Hop Farm and the making of Harvest Ale. The first beer in our Exploration Series. Subscribe to The Crooked Path YouTube Channel . Watch the first episode https://youtu.be/AiiN6nlaRpw

In August we will release our first 12oz Can Variety Pack, designed by Ebbing Branding. The variety pack will be followed up with 12 Pack cans of Crooked Tree and Raspberry Ale. We will be line pricing all three 12 Packs at current market PTR’s / PTC’s. The 12 Packs will be in the new look and share the same DNA as the new cans. The new 6 Pack cans will be rolled out and staggered over the next 90 Days.

In February we engaged Ebbing Branding and Design to overhaul the Dark Horse Brand. Matt Ebbing came to Dark Horse and spent the entire day with us taking in all that is the Dark Horse Campus. We started with a logo refresh and now have almost completed a new look for all core beers. (Crooked Tree and Raspberry). Matt’s goal was to pay homage to the heart and soul of Dark Horse along with adding a fresh new feel. The team at Ebbing Branding worked closely with Bruno Michaud a unique heritage-tattoo style illustrator based in Bordeaux, France. As you can see the new cans show the traditional grit and style of Dark Horse along with a modern update. We have worked tirelessly on the new look. 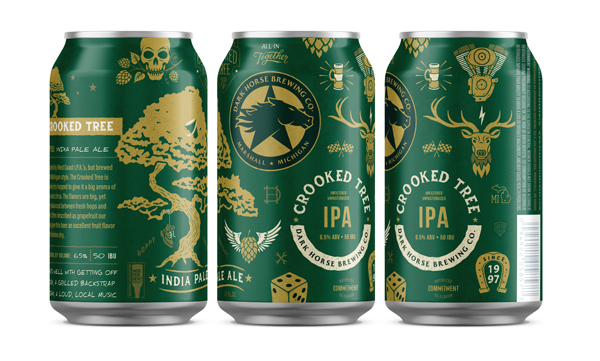 The “Tree Series” will start to come to market late June draft only. I’ve personally spent many hours with our brew team during the shut down talking about beers they have up their sleeves. The first beer that came out of everyone’s mouth was Mango IPA. In creating a new franchise, we named the beer Mango Tree, brewed a small batch and sold growlers to go only. Fastest selling beer we’ve had in years. Currently draft only, we will be releasing this beer to select Wholesalers and markets.

We recently started working with Black Lab Five, a Marshall, Michigan based firm. Founded by Kent Elliott and Kyle Maurer, BL5 have worked extensively in the craft beer industry for nearly 20 years, and previously served as the agency-of-record for both Bell’s Brewery and the Michigan Brewers Guild. We have been hard at work on new consumer campaigns for both Dark Horse and ROAK. We have embarked on a Web site refresh, Consumer-Retailer-Wholesaler newsletter campaign, sponsorship of a local music series, a local spotlight series, me doing a funny-stupid video series, new label art campaign and plenty more.

We’ve got some great specials. Growlers to go. Fully stoked up on all of our beers. Friendly masked faces. Food to go. It’ll be great see everyone.